The Isle of Dread

Ah the classic X1. Do I really need to say anything about it that hasn't been said? No probably not. I'm about to start running this with my group, so if you, the reader, happen to be one of them, please stop reading this, and here are the changes I plan on making. Have any suggestions? Feel free to comment, I won't say no to your ideas/criticisms. 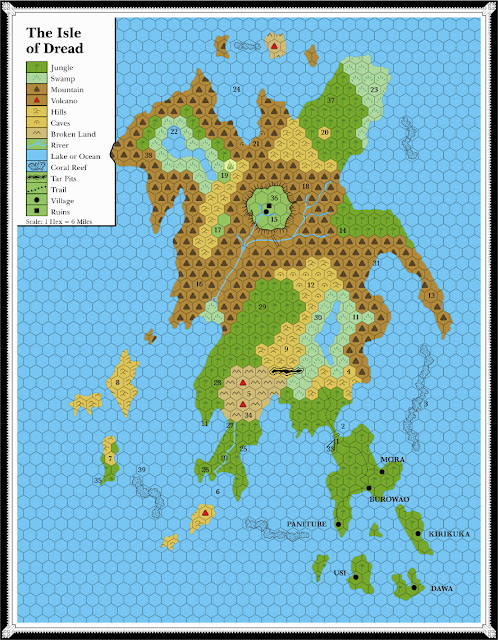 The biggest addition to the Isle of Dread is content from the Savage Coast; the two books share quite a bit in common in terms of creatures like aranea, rakastas, phantatons, etc, and both heavily focus on the exploration factor. I didn't add all of Savage Coast in, notably ignoring all the bits with tortles, and instead just taking some of the minor encounters along the river with all the gold harvesting. This is big because the other thing I added to Isle of Dread was a story - aka I'm ripping off Apocalypse Now/Heart of Darkness. The Cult of Evil Chaos (the same as the one in Keep on the Borderlands) has perverted the mind of a tactical genius in the Forces of Law. He's now an insane terrorist who has made himself a god to the local cannibals. Back to the river of gold, this is now the Mekong River. The entire south-western peninsula is the vietnam war now, complete with booby traps, shamans who can deliver napalm strikes, and maybe I'll find a way to include helicopters.

The PCs are hired by the Forces of Law, who now have bases in the southern settlements, to become Martin Sheen and kill General Roderick Poe, fromer Royal Dragoon Gryphon Corps. I'll probably also add in a halfling called Dennis Hobbit, man.

Other than that, I've added a teleporting system with each node being unlocked once you discover it (also makes an easy piece of treasure when you roll 'treasure map' - just have a map that leads to a new node), and a haunted pirate ship full of lost souls that the PCs can battle and then commandeer for themselves assuming they defeat their captain, the vile primate-pirate, Davy Jones. 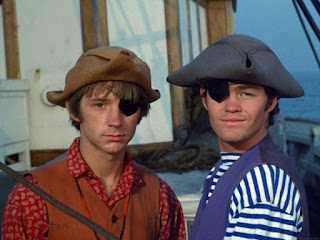 I'm also removing phanatons because I think they're dumb.

The Dinosaur encounters will likely feature my custom Dragosaurs instead of normal dinosaurs (rules for these dudes are found a few posts down. Check 'em out)

Legend IoD=Isle of Dread, SC=Savage Coast, N=New. The number that follows will be the key number in the original module or the page number in some cases.

2 IoD2 Jaws from the Deep

3 IoD3 Lair of the Sea Snakes

5 IoD5 Caves of the Rock Baboons

6 IoD6 Lair of the Giant Squid

11 IoD11 Lair of the Lizardmen

13 IoD13 Aerie of the Gargoyles

20 IoD20 Abode of the Green Dragon

21 IoD21 Lair of the Wretched Troglodytes

Popular posts from this blog

August 15, 2020
It’s hard to find good info on MYFAROG; too often it falls into shit-slinging and politics. As a fan of black metal music, I intend to give it an honest look - one not coloured by opinions regarding the author.    That was the weather, and now to Varg with sports.
Read more 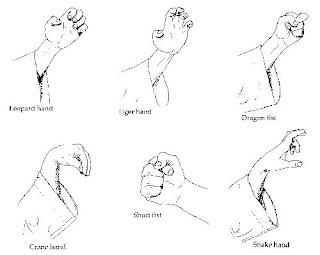 It's a universal fact that Kung-Fu films are awesome. If you disagree, go watch Drunken Master. Now that you've watched Jackie Chan act like a jackass for 110 minutes, let's carry on. Say you wanted to add some kung-fu moves into your OSR games - this could get muddy real quick and easily devolve into building an entirely new combat system full of complexity that doesn't really have a place in OSR. Instead, you could just use these 6 handy-dandy martial arts styles that give the PCs a single ability tied to the classic schools and animals of kung-fu; Tiger, Panther, Snake, Crane, Dragon, and Mantis.
Read more

July 19, 2020
Regrettably, I've never played Traveler or Stars Without Number or any other old-school sci-fi game. I've played an assload of Star Trek Online and some SFB (mainly when I was younger) though. I've always wanted to run an outerspace hexcrawl and because I'm too lazy to read some other system's rules, I'll make my own. Which is probably the opposite of lazy when you think of it. These 'rules' aren't presented in any coherent manner; rather they are in the order they appear in my off-brand word document of notes. Scale is an important choice in these games; I often find sci-fi too large or too small. I'm no expert in astrophysics, but my numbers work for my own purposes; yours might be different. 1 hex represents a week of travel using standard sci-fi light engines. In terms of distance, this is 1 parsec, or 31 trillion kilometres. Don't ask me what that is in miles. Standard engines allow the ship to travel at ~20 times the speed of light. At
Read more